An early scene in the film The Lion King has young Simba venturing off with a reluctant young Nala into the forbidden territory of the Elephant Graveyard. Simba had been enticed into this by the sinister “Scar” who, but for Simba, would be next in line as King.

The two cubs come close to becoming entrees in a savage hyena gorge but are rescued by the appearance of Mufasa, Simba’s father and reigning King of the Jungle. 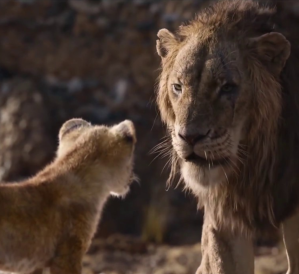 The danger past, Mufasa now turns his attention to Simba. “I’ve got to teach my son a lesson,” he says.
“I’m very disappointed in you,” He tells Simba. “I told you not to go there. You and Nala could have been killed!” Mufasa admits to fearing for his son’s life and a repentant, yet proud of his father Simba, says “I bet those hyenas were even scareder!” “Nobody messes with your dad!” replies Mufasa.

The two wrestle playfully… the lesson has been learned… the Father-son relationship restored.

Reconciliation with the Father. It’s the first step in a journey of amazing discovery, adventure, challenge and change.

This past Sunday Elder Jim Longworth brought us a message which began with an illustration of cookie snitching restoration and led us through the milestones of maturing in Christ. But it all begins with our coming into right relationship with the Father.

Young or old it makes no difference. An eternity spans before us all. You are neither too young nor too old to come to the Father through the invitation of the Son — to agree with His verdict and receive His provision.

Do you feel that discomforting conviction, that disharmony… that fearful aloneness of lostness?

Come to the Father. His only agenda with you is your restoration: He has come to rescue you from the hyenas, not to throw you to them. He will lead you out of forbidden areas… across the savannah, into a great and glorious new dawn!

“All glory to him who loves us and has freed us from our sins by shedding his blood for us. He has made us a Kingdom of priests for God his Father. All glory and power to him forever and ever! Amen.” (Rev. 1:5b-6 – NLT)

To hear Elder Jim’s message, go to the Lincoln Baptist Church website and look under ‘Media’ for the Aug. 11 message.

If you would like counsel or guidance in making this surrender to Jesus Christ, please use the Contact page and we’ll get in touch with you.