How do my trials bring glory to God? Just outside of Fredericton is the New Brunswick International Speedway, known also as Speedway 660. The quarter-mile track boasts itself “Canada’s Fastest Short Track.” Folk flood to it every summer for the fast fun and famous french-fries. 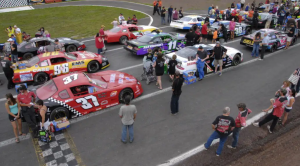 I attended a race there’s few years back which remains one of the most exciting competitions I have ever witnessed. I don’t remember the driver’s name, car number, or the type of vehicles vying, but I do remember the manner in which the race unfolded.

Everyone was cheering for the preferred front runner, we’ll call him Joe… Joe Fastguy. Joe had won countless previous races leaving his competitors quite literally far behind and ‘eating his dust.’ This race was expected to be no exception. And it wasn’t, at first.

Joe Fastguy bolted ahead right from the get-go. In no time he was several car lengths ahead then several laps. The outcome seemed a done deal as Joe Fastguy was now three whole laps ahead of the pack and the announcer focused on who might come in second. 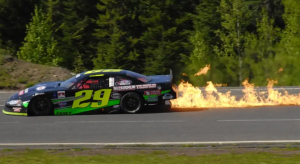 But then, something happened… I’m not a car guy but it was obvious something had gone terribly, terribly wrong! There had been a “B A N G” and Joe Fastguy’s car slowed instantly to a crawl. Smoke billowed from the car and mixed with its warped hood to block Joe’s view. Whatever it was that caused the explosion, the force of the blast had blown one of Joe’s rear tires right off the vehicle! Scraping could be heard and sparks flashed from the wheel rim as it dragged along the track. — But Joe pushed on.

“O what a bad stroke of luck for Joe Fastguy,” said the announcer. “Looks like this time he won’t be Number One.”

There were four laps left in the race, but still Joe prodded on. By the time the pack had completed one of those final four Joe had gotten in only a quarter lap! By the time they completed another he had barely got half way round. By the second last lap for the pack Joe’s car, which once had that three lap lead, was about a third lap from the finish. But the #2 car was zooming in with just 2/3rds a lap to the flag.

The fans were now back cheering Joe on as he turtle limped to the line and his competition raged in like an angry rabbit. But Joe won! The crowd went wild, popcorn and french-fries flew through the stands as most everyone leapt to their feet! It was a great and glorious triumph indeed! 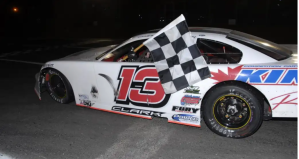 You see, many drivers would have just given up after that initial explosion. But not Joe. Chance had dealt him a tough card but Joe determined to play his game to the end. Joe was not a quitter and all the more attention to this fact had been drawn to Joe because of how he reacted, persevered and triumphed when things went terribly, terribly wrong.

When we do the same in those times the Lord allows trials into our tracks, we bring glory to Him because only in these moments can His true Strength be made known.

The choice of response is ours.

Note: Photos are not of the race described.