The original hymn “Amazing Grace” was written in 1772 by the English poet and Anglican clergyman John Newton and published in 1779.

Amazing grace
How sweet the sound
That saved a wretch like me
I once was lost, but now I’m found
Was blind, but now I see

Newton was born in 1725, he had a troubled childhood, in his 20s he tried to desert the Royal Navy, was abandoned by his crew in W Africa, became a slave trader’s servant, he was eventually rescued, cried out to God during severe storm at sea, but became a slave ship master for several years. After a violent illness at sea in 1754 he abandoned the slave trade and devoted his life to serving God. Newton was ordained as an Anglican priest in 1764 and wrote some 280 hymns including “Amazing Grace.”

Newton fought alongside William Wilberforce to abolish slavery and lived to see the British passage of the Slave Trade Act before he died in 1807. The hymn was set to its popular tune by William Walker in 1835.

There have been many renditions of this classic over the years. Familiar to many is the contemporary “Amazing Grace (My Chain’s are Gone)” version released in 2006 by Chris Tomlin & Louie Giglio. After its second stanza an added refrain explodes in exuberant praise,

My chains are gone
I’ve been set free
My God, my Savior has ransomed me
And like a flood His mercy reigns
Unending love, amazing grace

Link here to a you tube video of the song.

What are these people singing about? Why are they so emotionally thrilled?

It is because of this very fact of freedom… of chains now gone. They celebrate the great truth that “…because of his great love for us, God, who is rich in mercy, made us alive with Christ even when we were dead in transgressions—it is by grace you have been saved.” (Eph. 2:4-5) 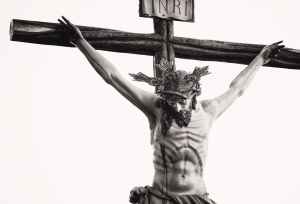 God has done all the work. The Christian is set free from fear of death, of punishment, of self-effort to please an angry God. Paul reiterates, “…it is by grace you have been saved, through faith—and this is not from yourselves, it is the gift of God— not by works, so that no one can boast. For we are God’s handiwork…” (Eph. 2:8-10)

They have seen that God is not angry. Christ took the wrath. He has done all the work, reaching out to us when Him doing so would be the last thing we might ever have imagined God would do, “While we were still sinners, Christ died for us.” (Rom. 5:8).

We give up trying, we acknowledge the myth of the “self-made” man. We surrender to Him only to find that all the while He was chasing us not to punish but to offer pardon! Now He is ours and we are His for eternity. “God, who called me here below / Will be forever mine”

The relationship is no longer judicial, but personal. We no longer desire sin… we are freed by the attraction of a greater love… a love which satisfies. We do not wait for eternity to begin at death. Eternity has begun now. “You are forever mine.” The Tomlin rendition ends.

We are free! Sin is no longer the thing which we want. Our new desire is to do what we ought.

Are you interested in being discipled one-on-one in the fundamentals of new life in Christ? Or, perhaps you would you like to know how to begin this journey and take the very first of the First Steps by turning from your current path and committing your path to Christ? — Use the Contact page and we’ll get you started.