Who are the ‘Imprisoned spirits?’

“After being made alive, he went and made proclamation to the imprisoned spirits— to those who were disobedient long ago when God waited patiently in the days of Noah while the ark was being built. In it only a few people, eight in all, were saved through water” (1 Pet. 3:19-20 – NIV). 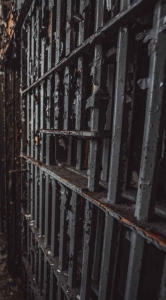 Bible scholars recognize that this is one of the most difficult passages of scripture to understand. Multiple questions emerge immediately. Who are these “imprisoned spirits?” What is the nature and location of their imprisonment? How and why did Jesus ‘preach’ to them? What was the content of His message? Is this describing an actual or a symbolic event? Is it past, present or future?

Matthew Henry suggests that just as Christ came to speak God to us, so God spoke to the people of Noah’s day by the Spirit speaking through Enoch and Noah to point them to the salvation of the ark. They did not listen, thus perished. Consequently Peter calls them “spirits now in prison.” – Says Henry: “their spirits cast into hell, which is called a prison… but Noah and his family, who believed and were obedient, were saved in the ark.”

Bridgeway sees this differently. After triumphing over death, Christ, whose sinless, eternal now un-incarnate Being could not be bound, next visited the realm of darkness: “He then went to the place where evil spirits are imprisoned awaiting final judgment and announced his victory.”

Barnes leans toward the interpretation of Henry: “Christ delivered a message to the antediluvian race by the agency of Noah. No argument, therefore, can be derived from this language to prove that Christ went and personally preached to those who were confined in hades or in prison.” 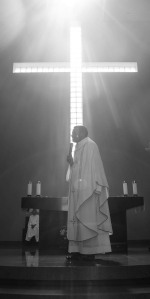 Clarke mentions that some take the passage to mean the preaching of the Gospel to the Gentiles. (That seems a bit of a reach to me.)

It is from this passage alone that Catholicism builds its doctrine of purgatory. But it is very dangerous to build any doctrine from only one passage. The whole counsel of God must be sought.

Personally I see this passage as describing in some small way what I’d call a sort of ‘Ta-da!’ moment possibly occurring from our perspective during the time Christ’s body lay in the tomb. Christ, having finished mankind’s redemption now appears in some way to those – possibly souls of mortals and angel spirits alike* – who refused God’s authority and will. He ‘preaches’ (i.e. announces) to them the fact of His great victory, the culmination of man’s salvation and thereby demonstrates to these poor ones that their punishment is indeed just.

These are my thoughts on this at the present and are probably best taken as merely opinion. There are many things about which we must wait for eternity to fully grasp (John 16:12), if indeed the Lord deems it appropriate.

The great thing for us to understand now is that Christ is Lord of all and Judge of all and all His ways are just. Christ now “has gone into Heaven and is at God’s right hand—with angels, authorities and powers in submission to Him.” (1 Pet. 3:22).