Coming in for a Close-Up…

Gemini Man is currently among the most talked about new movies to arrive in theatres. The film stars Will Smith as Henry Brogan, a 51-year-old assassin who is being hunted by a younger clone of himself. Brogan must uncover why and who is behind this creation. The film uses the latest computer based de-aging technology and was years in the making just waiting for such creative possibilities. It was filmed originally at 120 frames per second rather than a more typical 48 frames in order to create more precise images. 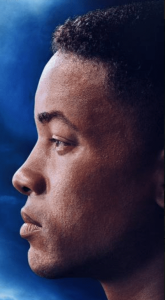 The reason for all this is that director Ang Lee desired numerous close-ups of his digital co-star. He wanted every detail, every pore, to appear as a believable flesh and blood character. For that, the technology had to mature.

Pastor Andrew’s message this past Sunday challenged us to follow Jesus as His disciples did – up close, and under our Lord’s near scrutiny. (see Mark 6:1). They were with him when Jesus preached in his hometown and they heard the people respond saying, “Where did this man get these things?” …“What’s this wisdom that has been given him? What are these remarkable miracles he is performing?” (Mark 6:2).

You see, they knew him as the carpenter boy, the young lad who grew through his teens and into his twenties among them. He was an ordinary fellow, a nice guy. But now where did all this come from? They had grown up being near to him but now they backed off. Scripture tells us “they took offense at him.” (v. 3). They didn’t like the idea of the neighbourhood kid pointing out their blemishes.

As Pastor Andrew pointed out, a nearer scrutiny reveals more flaws. Nevertheless, we need to allow God’s magnifying glass and bright lights to search us up close deep in our souls, like a diamond appraiser. This is the only way our flaws can be righted. It is the only way our cancer can be excised. In order for our proud hearts to allow this, it is we ourselves who must mature.

Just a few years later Christ ended his earthly ministry and ascended to heaven. Then those who had followed him “up close” by the power of the Holy Spirit began to build His Church.

Scripture records how members of the Jewish council of rulers, elders and teachers of the law “were amazed when they saw the boldness of Peter and John, for they could see that they were ordinary men with no special training in the Scriptures. They also recognized them as men who had been with Jesus.” (Acts 4:13).

Follow Jesus up close. Allow him to search and scour and clean and change you. You’ll be amazed at the result!

To hear Pastor Andrew’s complete message, go to the Lincoln Baptist Church  website and look under ‘Sermons Online’ for the Sept. 13 message.