In a way I think my misread makes an even more interesting question. The first question about complaining suggests a presumed right which none of us fallen mortals should dare think is ours. God owes us nothing. The very fact that we can approach Him at all and ask for anything… why… its absurd! Its as though a gnat were to have audience with a king and request a lifetime supply of…. well, rotting fruit (Gnats like that, I understand)!

OK, OK, I know gnats only live 7 to 10 days and that a single bad apple would certainly be enough to amply fill the bill, but you catch my meaning. We have no right to complain for we have no right to request anything in the first place. We who have done nothing but buzz annoyingly about the face of the Almighty deserve rather the swat of His Hand or a hearty blast of bug killer.

Yet, if this king were to grant this gnat its request–and even more–most surely this insect should be thankful. It was received into the throne room, its petition had been heard, and the royal response had been more than favorable. It had been given what it did not deserve. That is grace.

The gnat must be thankful also that it did not receive what is more fitting for an insect before royalty – a swift dose of poison and it’s final demise. It had not been given what it did deserve. That is mercy.

This past Sunday Pastor Steve’s message was “Staying Connected to the Vine.” (see John 15:1-13). This is essential for fruitfulness. We must also remember that it is by grace that we are in connection to that Vine at all! Do you see good fruit in your life? If so, do not become proud… rather give thanks to God.

Paul adds to our understanding…

If some of the branches have been broken off, and you, though a wild olive shoot, have been grafted in among the others and now share in the nourishing sap from the olive root, do not consider yourself to be superior to those other branches. If you do, consider this: You do not support the root, but the root supports you. You will say then, “Branches were broken off so that I could be grafted in.” Granted. But they were broken off because of unbelief, and you stand by faith. Do not be arrogant, but tremble. For if God did not spare the natural branches, he will not spare you either. (Rom. 11:17-21) 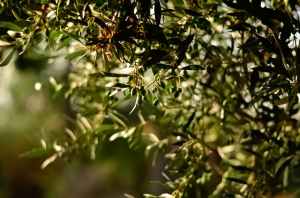 What Paul really has in mind here the distinction between Jews and Gentiles, but it is equally true that all people have been separated from that Vine by sinfulness. It is a Holy Vine, it must bear Holy branches and Holy fruit.

Yet this is exactly what God, the Good Gardener, intends to make of us! It is exactly how He sees us now, “…a holy nation, God’s special possession, that you may declare the praises of him who called you out of darkness into his wonderful light. Once you were not a people, but now you are the people of God; once you had not received mercy, but now you have received mercy.” (1 Pet. 2:9,10)

Praise Him — and be fruitful!