The moment I described in my blog yesterday* was made especially poignant to me because of one further fact I have not yet shared with you. The song, “Morning has Broken,” was our wedding day song as Val and I walked down the aisle some 35 years ago this April. Since then we’ve run through many trials, many breakings, dodged or been scarred by many sharp bits. Along this path we held to this confidence: What God began, He will complete.

“…being confident of this, that he who began a good work in you will carry it on to completionuntil the day of Christ Jesus.” (Phil. 1:6)

The Loneliness of the Long-Distance Runner was originally a short story by Alan Sillitoe, published in 1959. It features young rebel Colin Smith who runs in a foot race against a rival reform school, but throws the victory at the final moment. The novel was made a movie just three years later. Eventually the title became a catchphrase embraced by ultra-distance runners and adventurers of all sorts.

There is a certain loneliness in a pre-dawn run… or rather, an “aloneness,” which invites introspection… communion with one’s own spirit, or for the Christian, with the Spirit of God. Staying the course with a hope in your heart unites all believers, be they yoked or solitary. 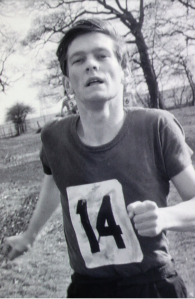 That the path has difficulties is not due to one’s yoke or one’s lack of it. The difficulty is promised to all who have hope in God. “…In this world you will have trouble,” said Jesus. “But take heart! I have overcome the world.” (John 16:33).

It does no good trying to speculate and blame this or that other cause. The only sane thing to do is to do what the Master told us to do, “Take heart!” Strengthen yourself in the Hope that is firm in Him… found and founded in Him: “I have overcome the world.”

He knows the end of the story – of your story… my story… He knows what He has begun will be completed, in you… in me. In all who hope in Him. He knows because He is in the ending already.

So take the next step, and the next. Soon the full light will illumine all things… press on…

“The path of the righteous is like the morning sun,
shining ever brighter till the full light of day.” (Prov. 4:18).

A sincere THANK YOU to all who have run with me thus far, and to all those new to the path.