Yesterday’s talk about tug boats got me thinking about a book I used to treasure as a child: Scuffy the Tugboat.

Written by Gertrude Crampton and published in 1946, the story begins,

Ever feel like that? “This is no place for me!” … “I was meant for bigger things.” Well, you are absolutely correct! And the Holy Spirit is exactly the One to lead you there.

As Scuffy’s story unfolds he ends up being taken to a brook, but then the current catches him. The brook becomes a stream, the stream becomes a river, then an even bigger river. Scuffy is overwhelmed! Then, up ahead Scuffy can see the approaching ocean!

Some people fear that if they yield themselves fully to the Holy Spirit they, like Scuffy, will be swept away to places they do not want to be… out of control and doomed! 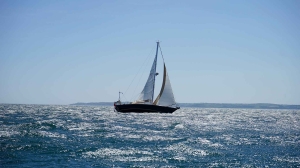 But the guidance of the Holy Spirit is nothing like that. In fact, if anything, it is more like the breeze that propels and guides a sailboat. Mind you, the Holy Spirit is still capable of those gale force winds I mentioned yesterday, but they are there for your good not your harm. They can carry you swiftly away from dangers or blow hard against the enemies of Truth. More often the Spirit’s Voice is gentle, and must be entreated….

Consider these examples from scripture…

Gut feeling…
Paul and his companions traveled throughout the region of Phrygia and Galatia, having been kept by the Holy Spirit from preaching the word in the province of Asia. When they came to the border of Mysia, they tried to enter Bithynia, but the Spirit of Jesus would not allow them to. (Acts 16:6-7)

Vision… Inner Voice…
While Peter was still thinking about the vision, the Spirit said to him, “Simon, three men are looking for you. So get up and go downstairs. Do not hesitate to go with them, for I have sent them.”
(Acts 10:19-20)

After worship, fasting and prayer…
While they were worshiping the Lord and fasting, the Holy Spirit said, “Set apart for me Barnabas and Saul for the work to which I have called them.” So after they had fasted and prayed, they placed their hands on them and sent them off. (Acts 13:2,3)

You’ll recognize the Holy Spirit when He speaks to you. It’s the Voice of a Friend.