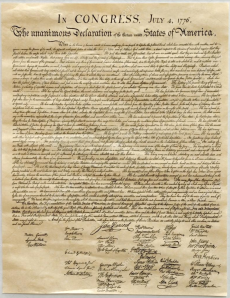 It begins with the words “We hold these truths to be self-evident, that all men are created equal, that they are endowed by their Creator with certain unalienable Rights, that among these are Life, Liberty and the pursuit of Happiness.” It ends referencing “…a firm reliance on the protection of Divine Providence…”

Truth which is “self-evident” requires no proof or reasoning. It’s assertion is obvious. If I say “The house is bigger than its bathroom,” I really don’t need to take measurements and show you mathematically that this is true. It is obviously true since the bathroom is only a part of the house the whole house must be bigger than the part of it. I don’t need to show my work!

Like it or not, there is an ultimate standard, there is Truth and a moral law. – And it is by these that we all shall be judged. We stand before a very real God with very real standards and requirements. None of us can of ourselves meet His Standard, for His Standard is Holiness (Heb. 12:14). We need His Son Christ Who stands in our place, His Holy Spirit Who leads us into all truth, and the mercy of our Heavenly Father Who embraces us and transforms us into His Likeness.